The day was special and I was lying on my bed reading newspapers at 9 am. There were so many things in the paper about the special day and how people gonna celebrate the day. It was indeed last digits visible on the calendar in all our living souls’ lifetime. I was wondering what I should do today to make our day special. My mind ran in to various things like watching a movie, going out for a lunch or dinner, shopping e.t.c. Finally made up my mind at going out on a short trip. The place was finalized “Bhoram Dev”.  The place is located 135 kms from my location Bilaspur.

I thought it was a piece of cake, good place, going out with family and a good picnic on a very special day but I was not aware of the surprises which were waiting for us. Yup lots of them and the day turned out quite an adventurous one for all of us.

Let me start with a brief about the place first.

The place is known as Bhoramdev. It’s a very old temple of Lord Shiva. It situated 135 kms from Raipur (Capital of Chattisgarh). Situated in the Maikal mountain range amidst the dense forest in Chattisgarh. The temple was built in the 11th century A.D. by King Devrai. The Bhoramdeo temple has a resemblance with the Sun temple of Konark and The Khajuraho temple and that is why it is also called the Khajuraho of Chhattisgarh. 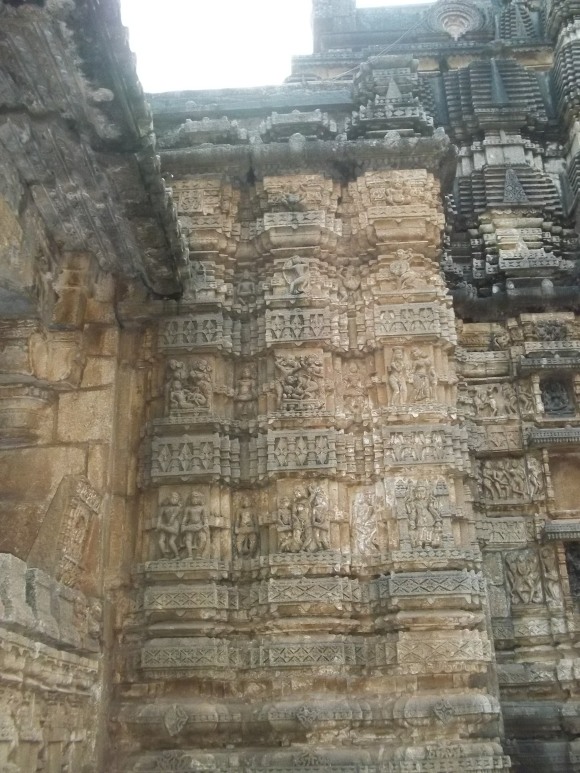 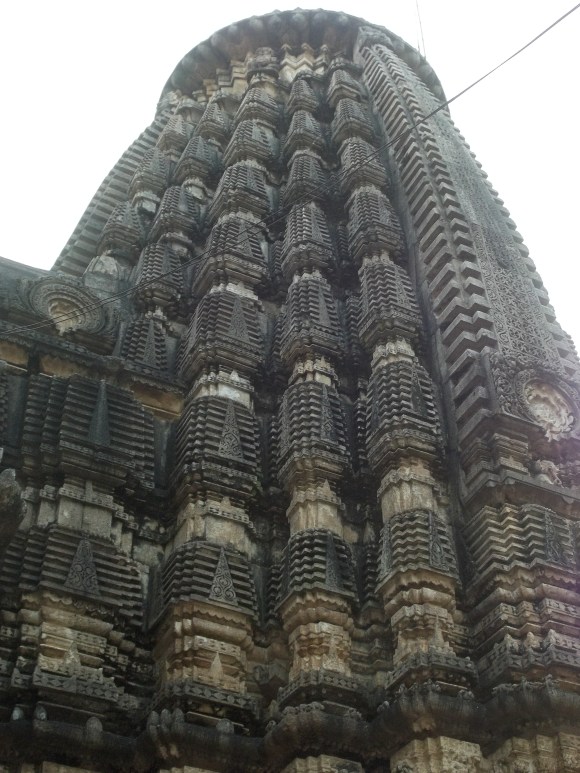 I finished up an official telecon of an hour and got ready immediately. It was already 11 am. We all had quick bite and quickly left for the location of our choice “Bhoram Dev”. It was a nice start with a fabulous weather and lush green countryside surroundings on either side of the road.  We crossed lots of villages on our way discussing about my parent’s childhood memories, our son and lot many other things. It was after about 120 kms, I asked somebody for the route. He explained me 2 routes, one shortcut and one long one. I went forward and saw the sign boards put up by the government of Chattisgarh after which I never turned back and also ignored the short and long routes explained to me by the person few minutes back. We started enjoying the route as it was a hilly terrain with lush green dense forest on either side of the road.

After about 15 km the sign boards were still there but the target location was unknown and no sign of people in the area. There was nobody who could tell us where to go. Suddenly we came across 2 guys in bike who told us that we are in the wrong route. The route where you are heading is still not ready and is closed. It was around 3:30 pm and was beginning to get dark in the forest, although its always dark in these forests. We thought why go back 30 km, lets try out that closed route. May be its ready and we can go as there was a chance. We headed for the route and came across 2 guys again on bike coming towards us from that route. They confirmed the route is okay enough for the car to pass. We entered in to that road, a hilly road, had sharp turns and one of the most narrow one I have ever come across in my life, which can carry one 4 wheeler at a time.

It was a 12 km stretch. We went on. It was really a dense forest with no one on the road for around 5 kms. After 5 kms we located some people working on the road and my breathing went a bit slow after beating so fast for the last 5 kms.

We asked again and got a positive reply that road is ok for us to pass but it has sharp turns and has lots of steep ups and downs. Went on but had a peace of mind on the road and also the distance. After crossing beautiful scenes consisting of hills, forests and ponds we reached our destination. It was cold outside but beautiful setting. One side had a large pond with a hilly background, middle a temple and one side, a beautiful park.

It was around 4:30 pm and we quickly went on to see the temple and garden. It was a beautiful temple with lots of beautiful sculptures. The ambience was so peaceful that we forgot our long and adventurous journey.

It was already 6 pm by the time we left the place after our temple visit and late lunch. It was dark already. We took a different route now and were confident of hassle free travel but due to some villagers advice we took a short cut and we were in a pathetic village road with lots of bumps and potholes. There was no road visible, I looked at the speedometer and it was at 30 km/hr sometimes 20 km/hr. This was a 15 km road with nobody was visible on the way. There were paddy fields around. In-between we came across some villagers for confirmation on route. Some people won’t believe we crossed the 15 km stretch in 45 minutes. It was almost 7 pm and it was dark with empty streets but only thing which was comforting was that we were on highway and it will take us to our base location. My 2 year kid was bored like hell and was getting irritated, my wife was angry at me for making a plan like this but thankfully my parents were with me and backing me up.

We were cruising at a speed of 90 to 100 km/hr and accidentally I took a wrong turn and went on to “Lormi” instead of “Mungeli” and went on to travel 27 kms.Mungeli route is under highway and lorni is like a village road.

The map will clear this as below, 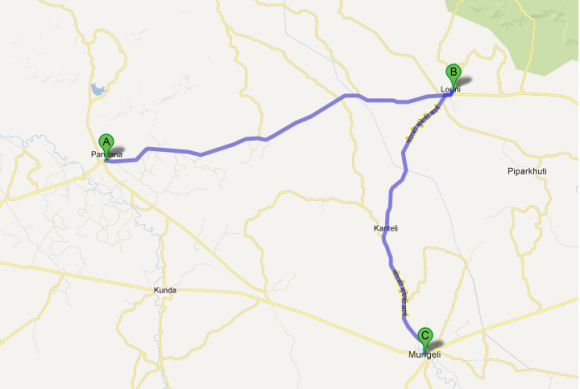 After these 27 km distance I realized the road is not familiar and asked for directions in a shop which was getting closed. There were five guys and I guess all were pretty heavily drunk and were giving me ridiculous directions and distances. One guy came and told me bluntly “ Sir don’t fall in to bullshit of these people and go straight you will reach your base location and gave me the names of towns which will come in between but told me that the route is bad to worse for around 20 kms and is getting repaired. With a heavy heart I came back and discussed with all the shareholders of my family. We decided we will not go back and went on trying our luck, hoping for an adventure. It was 8:30 pm and in villages here in India you will not find a single person on the streets. It was all dark and empty with few loaded trucks in between on a single 10 feet road. I went on trying to cover the distance as quickly as possible but due to road conditions and our ignorance of route made us to travel catiously. Finally we reached a place and my dad quickly recognized the same as he had worked on that area in the beginning of his career. We were pleased to hear that and traveled now with much more confidence. Reached Kota, a place I also recognize and felt like we are home finally. It was 9 pm at night and now it was all lightened up and filled with people all over the places. After traveling few more kms the problem with traffic came and once in my life I felt good to stuck in traffic and thanked to god. Finally we reached our destination at 10 pm. It was indeed a special day as we wanted it to be but turned out to be more than special for all of us.

By Rail :- Raipur is the nearest Railway station on the Bombay-Howarah main line.

A Working professional but love to write my experiences and share them. Love travelling and explore new places. Family, travel, food, movies and friends are the most important part of my life. Would love to make friends who share similar interest.

🇬🇧For English press the link in the menu!!

A daily selection of the best content published on WordPress, collected for you by humans who love to read.

A Season Of Mountains

A Note From Abroad

“Twenty years from now you will be more disappointed by the things that you didn’t do than by the ones you did do. So throw off the bowlines. Sailaway from the safe harbor. Catch the trade winds in your sails. Explore. Dream. Discover.” ~ Mark Twain

Mini breaks without breaking the bank!

Enjoying life in the Now!

One Room With A View
Bark Time

I don’t want a perfect life; I want a happy one.

The World according to Dina

Notes on Seeing, Reading & Writing, Living & Loving in The North

Traveling the World and Doing Good